Today I’m pleased to announce the stable release of Makelangelo software 7.28.2. I’d like to thank everyone in the community for your support, especially the Discord users working to find and report bugs.

The big news is that Marginally Clever is no longer maintaining Makelangelo-firmware. It was too much esoteric work taking up all my time. Instead I teamed up with the good people that make Marlin 3D printer firmware. Together we’ve added polargraph robot support. Check out FF4 if you want the open source code or to make your custom machine tweaks.

The newest makelangelo software is available in our store, by donation. You can also get releases from our open source github repository.

In order to make it run you will need to install Java JDK 17 or later.

video late because editor is AFK. one more pandemic shortage!

We’d love more people translating the app and sharing ideas about how to make it better. Join us on Discord or submit a ticket to github today.

This last week there has been work on Makelangelo software to make it work with the new firmware.

I spent a lot of time using design patterns to decouple classes so they can be independently tested. Usually this means an Observer pattern common in Java: a visible Panel on the screen has a list of registered Listeners and when something interesting happens in the Panel it calls notifyListeners(interestingEvent). This way Panel can be run and tested without needing any specific Listener.

I’d like to change up the code for a MakelangeloRobot to be decoupled from the NetworkSession – the source of data from the real machine. Then data could come from, say, a piece of code reading from a file. That way the state of the machine could be recorded and played back for testing things like “is the machine connecting to you a Makelangelo 5, a 3, a 2, or something else?”

I’m also plagued by ideas about how a Turtle path is used by a MakelangeloRobot. Turtle is a class that contains TurtleMoves, which describe the movement of the pen over the paper. One Turtle per color! Based on the old Commdore 64 turtle, one of the first procedural drawing programs I used as a kid.

Many classes in the Makelangelo app read and manipulate the history of TurtleMoves in a Turtle.

In a cartesian plotter the velocity, acceleration, and jerk have the same effect everywhere across the work area. Testing such a machine to find ideal speeds is not onerous. I would draw a grid of squares and on the x axis each square would have more velocity while on the y axis each square would have greater acceleration. In this way the sweet spot is easy enough to find.

In a polargraph plotter the challenge is much greater. What works at the top doesn’t work at the bottom, what works in the center might not work on the sides. Simply drawing a set of squares isn’t enough! Long story short I need your help to find the sweetest of sweet spots. Together we can do it. Right? Right??

…and that’s all I have to say about that.

These changes can be downloaded from the Makelangelo project on Github.

Did you know you can add bars to your timing belt? I didn’t.

Join our Discord to talk more about this post. 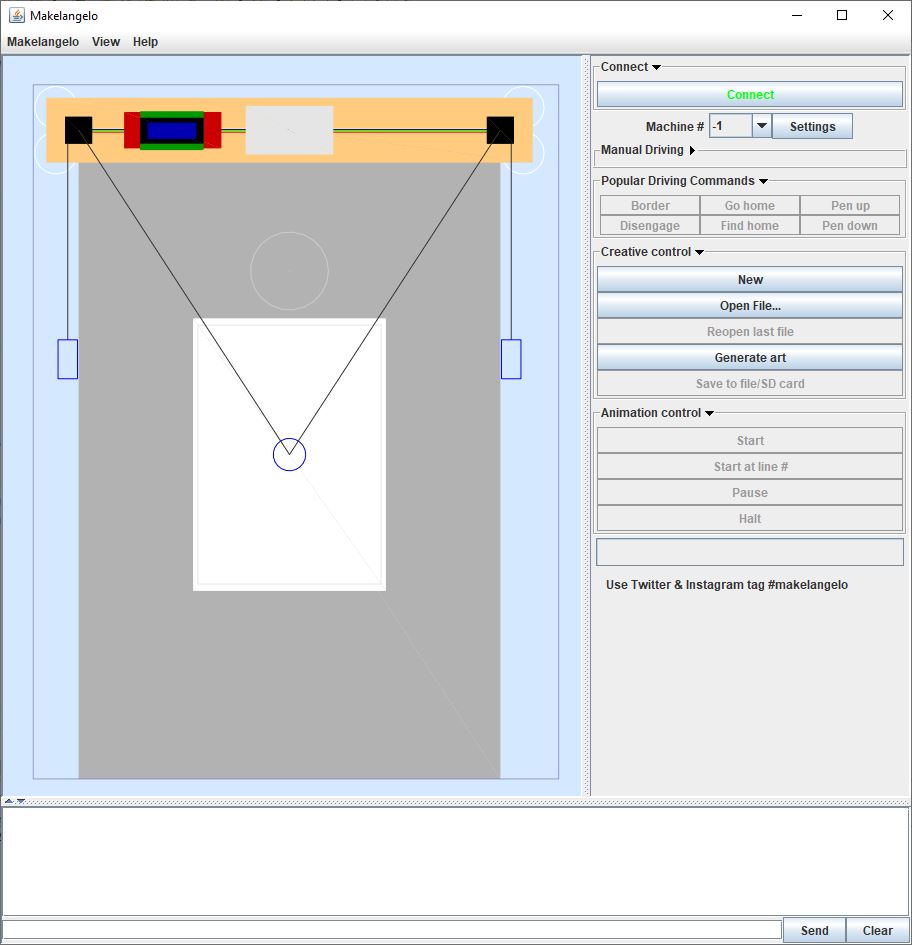 Let’s talk about the Makelangelo Software, how it’s built, and what I’m doing to make it better. I hope we can continue this discussion in the forums.

A very special thanks to all of you who have downloaded the software, given great feedback, made pull requests, and those who have donated to help support its development. You give me the energy to keep making it better. Stay awesome!

When I built the first Makelangelo robot it understood gcode, a human-readable text format used by CNC machine like 3D printers and milling machines. I was typing one line of gcode to the robot at a time through the Arduino Serial GUI. Works great; doesn’t scale. I needed a tool to deliver the gcode one line at a time to the robot. Makelangelo software was born.

Later I added a GUI to get a WYSIWYG preview. The preview system would read in the gcode in the file and draw a picture. Every frame, up to 30 times a second.

I had an ugly way to turn a bitmap (like a photo or meme) into gcode. It was too hard! So I added some Converter classes into the app. Each converter would generate gcode, which was then treated as normal by the rest of the system. The app was still reading gcode every frame AND if you changed settings like “pen up angle” then the gcode had to be regenerated by the style system.

I need to segue for a moment here. The Makelangelo is a robot that only draws lines described with gcode. There are two ways in the software to make a set of lines that will get turned into gcode. One is with a Converter classes (which turn pictures into lines). Another is with a Generator class (which makes up lines based on algorithms, aka procedurally). Both of these classes are a type of Manipulator. Pure vector files like DXF and SVG are not really converted, but that’s a discussion for another time. My point is “Manipulator” is a word for both types of classes-that-make-lines.

Recently I’ve been cleaning up the mess with Manipulators. That means instead of writing gcode to a file, each Manipulator controls an instance of a Turtle, just like LOGO on the Commodore 64.

This method has many benefits:

Having made this change I now have a new perspective. Instead of seeing the trees – writing to a file, dealing with exceptions, reading it back in, and all the minutia about the contents of the file – now I see the forest called Turtle, and everything that is done to the Turtle before drawing is an art pipeline. Converters and generators both produce a Turtle from some (or zero) other data at the head of the pipeline. The middle steps take a Turtle, change it based on some other data, and then pass it to the next step. The tail of the pipeline saves the Turtle to a format you want.

As a matter of convenience I am changing the drawing process so that all new drawings start with a “find home”. If your machine does not recognize the find home command, nothing changes. If your machine has find home, you don’t have to remember to do it yourself before starting a drawing. This more closely matches the behavior seen in 3D printers. Convenient!

The code can be found at https://github.com/MarginallyClever/Makelangelo-software. It is written in Java. There is a main branch for each release and a dev branch for unreleased maybe-broken current work.

The best way to contribute new code is to make a fork of the dev branch, make your changes, and then make a pull request. If you don’t know what those things are, please see this Github for Beginners tutorial.

If this has inspired you with new ideas or questions, please discuss it in the makelangelo forums.