Friday Facts 14: All the Sixi robot arms so far (demo at end)

Discord user Wted00 said “You talk about Sixi 3 a lot. What ever happened to Sixi 1 and 2?” Great question, long answer. This video covers robot arms before Sixi and then all three models of the current brand, along with interesting things learned along the way. Plus stick around for movement demos at the end.

Friday Facts 12: How to use Marlin in a Robot Arm

Building a robot arm is one thing, but what about writing the code to make it run? Some people want to learn the fine points of precision stepper motor control, forward and inverse kinematics, and then debug all that stuff. For the rest, working together gets the job done faster. For those people the Marlin 3D printer firmware is a great option. Today I’m going to show how I tweaked it to run in the Sixi 3 robot arm. Please share your experience with us so we can improve this post.

Marlin 3D printer firmware is the code in the brain of a very large number of printers. It is very flexible with a few changes. Most people might think of printers as having four motors – one for each direction and one for the extruder. But recent changes mean that Marlin can run up to six motors. That’s great for us, because most robot arms are 6 or less.

With Marlin installed you’ll be able to control the angle of each motor by sending gcode commands and even drive them simultaneously. With Marlin’s homing routines you could locate position, and new options coming in the near future will give real time feed back (more on that later)

What needs to be tweaked

Pour yourself a drink and settle in. This list will touch at least two files and take some time… OR you can use the sixi3 branch I maintain and adjust it for your speeds and gear ratios.

I keep trying new ways to make this list less dry. What do you think?

There are some exciting new features coming to Marlin that should make real time feedback possible. This means we’ll know the robot position without having to guess or to home. It also means we can tell when the actual position deviates from the expected position too much that a collision has occurred and that can save a lot of trouble! The new configuration options to explore are: 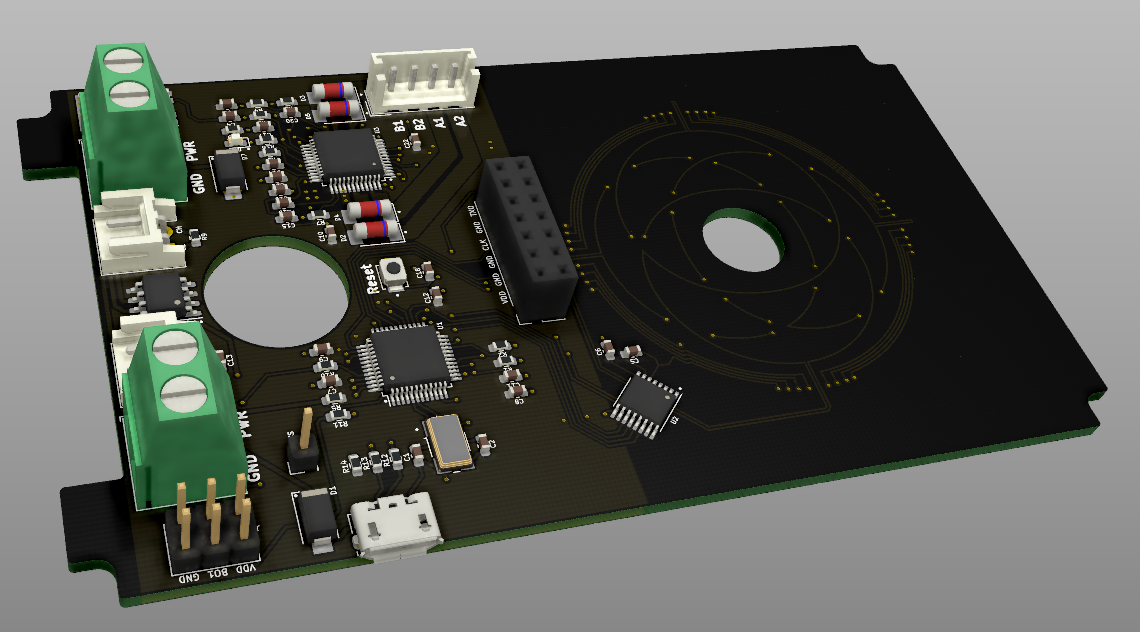 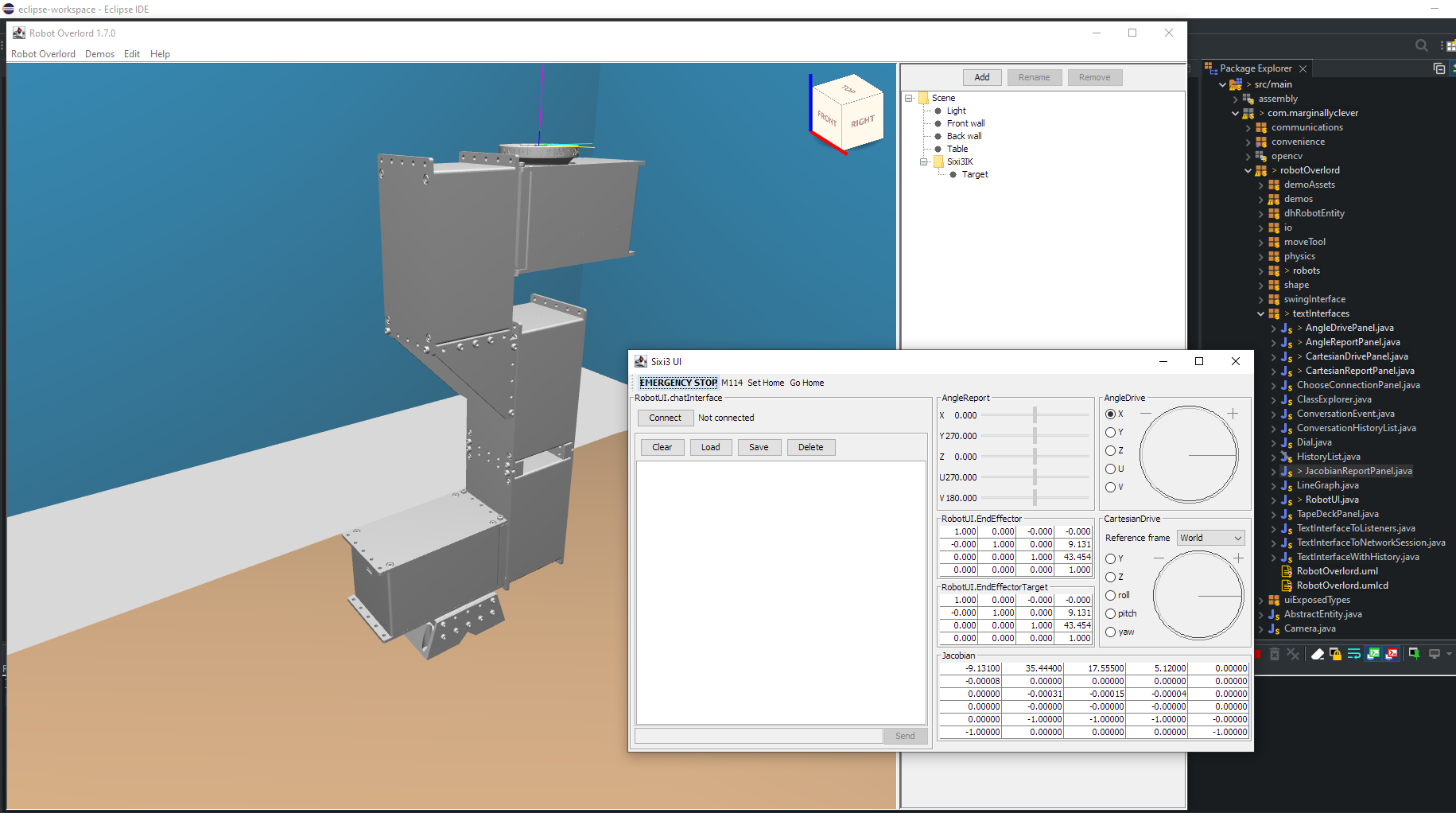 This week I’ve done a lot to make driving the Sixi 3 arm easier.

You’ll recall from FF1 that I had build a Panel to talk to a robot in Javax Swing.

Having made all that, I found it was no better than the existing Arduino serial interface for talking to the robot. My biggest worry is that I make a typo and send the robot crashing through the table before I can hit the emergency stop. So to address this pain point, I needed a way to drive more intuitively.

The Dial is drawn to scale whatever size you need. It listens for scrolling of the mouse wheel. Other classes can subscribe to get ActionEvents when the dial moves. This way the dial is loosely coupled and can be reused all over the place. For example,

Using the dial I built a panel that is initialized with a virtual sixi3 robot.

The radio buttons on the left are pulled from the robot model. The AngleDriving system listens to the dial. When the Dial moves then AngleDriving looks at the selected button, finds the robot joint, and tweaks it by 1 degree.

Moving the arm one joint at a time is fine some of the time, but sometimes I need to move in a straight line. I improved the look of the Dial a little bit and made this tool to move the end effector (finger tip) of the robot arm.

XYZ are straight line moves. Roll is a twist around Z, pitch a twist around X, and yaw a twist around Y. Each of these moves happens relative to the reference frame. The options for now are world, the first joint of the robot, and the end effector itself.

Once I had that I needed more ways to visualize what the system was doing. The two types I made are the AngleReportPanel,

And the various matrix reports.

Each of these listens to the robot reporting a change to the end effector position.

Big shout out to https://akintokinematics.com/ for the excellent Jupyter notebooks that helped me improve cartesian driving to work. For some time now I’ve been telling everyone how much I love Gradient Descent for moving the robot arm. Well… it turns out Gradient Descent is hard to tune and slow AF to converge on a solution, sometimes taking 30 seconds per millimeter. So, instead, based on Greer’s notes, I used the approximate Jacobian.

The approximate Jacobian is a matrix describing the relationship between joint velocity and cartesian velocity at a position. So from position A to position B have the cartesian difference {x,y,z,roll,pitch,yaw}, dAB.

I set up a loop to run (at most) 20 times. In practical terms it never seems to run more than 2 or 3 per step, and feels blazing fast.

Putting it all together

If you run the development version of Robot Overlord today and use Demos > Sixi 3 you’ll get this view and be able to drive the virtual robot by playing with the controls. Tweaking the dials moves the virtual robot. Sixi 3 UI listens for those changes and sends them through the RobotUI.chatInterface so they show up in the history and they move the real machine (if connected).

My next Thing is figuring out a nice way to run programs: loops, sequences, patterns, wait for signal, send signal, conditionals, and so on. The virtual robot does not know anything about gcode and my gut says it would be a really big mess to spread gcode around the app. I would love to jazz with you about this and find a Good Way to achieve the Thing.